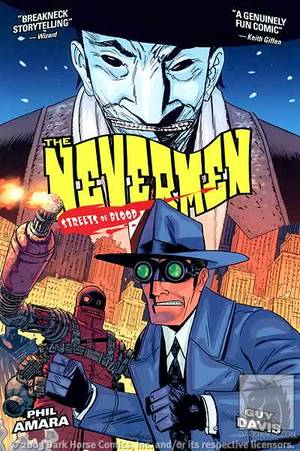 After saving Midnight City from the twisted machinations of mutant villains, the Nevermen return to their lives as everyday citizens, unaware that an even greater threat stirs far below the city streets. He calls himself Winterbone, and he has something catastrophic in store for the city's goggled gangbusters. To end Winterbone's icy reign of terror, our Nevermen have got to find out who this creep is and how he knows so much about their past. But they ain't going to like what they find out. Streets of Blood, the follow-up to last year's critically acclaimed, existential thriller, answers questions and reveals secrets about the enigmatic protectors of the innocent. Guy Davis and Phil Amara continue to delight both fans and critics as the bizarre origins of the Nevermen and the strange menagerie of creatures that populate Midnight City unfold.

"A distillation of everything that's right, cool, and weird in comics."