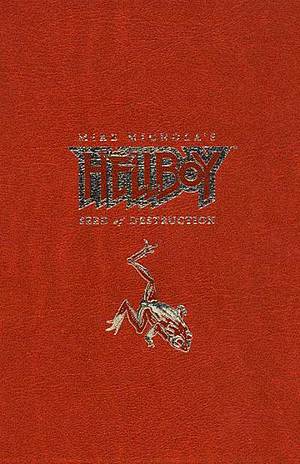 When strangeness threatens to engulf the world, a strange man will come to save it. Hellboy, the world's greatest paranormal investigator, is the only thing standing between sanity and insanity as he battles the mystical forces of the netherworld and a truly bizarre plague of frogs. And if he fails, we all fail with him!

The entire Seed of Destruction storyline from the first Hellboy miniseries, plus the Hellboy tales from the San Diego Comic-Con Comic #2, the Comics Buyer's Guide preview, Hellboy pinups from the likes of Frank Miller, Art Adams, Gary Gianni, Fred Blanchard, Simon Bisley, and Michael Allred, and a new 16-page art section from Mike Mignola that is exclusive to this limited edition, and a special signature plate, all tucked nicely into a foil-embossed slipcase. Limited to 1,000 signed-and-numbered copies.