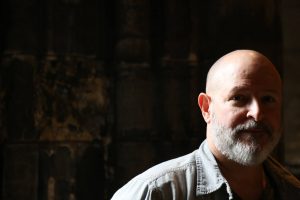 Reading DRACULA at ago 12 introduced Mike Mignola to Folklore and Victorian Supernatural Literature from which he has still never recovered.

He began working as a comic book artist in 1982, working for both Marvel and DC Comics before creating HELLBOY, published by Dark Horse Comics in 1994. What began as a single comic book series would eventually expand to a “Hellboy Universe” of related graphic novels, prose novels, short story anthologies and both animated and live action films. He also wrote and drew THE AMAZING SCREW-ON HEAD AND OTHER CURIOUS OBJECTS. He has co-written novels with Christopher Golden (Baltimore, or, The Steadfast Tin Soldier and the Vampire) and Thomas Sniegoski (Grim Death and Bill The Electrocuted Criminal), worked with Francis Ford Coppola on BRAM STOKER’S DRACULA, was a production designer on Disney’s ATLANTIS: THE LOST EMPIRE, and visual consultant to Guillermo Del Toro on BLADE II, HELLBOY and HELLBOY II: THE GOLDEN ARMY.

A new HELLBOY film directed by Neil Marshall will be released this spring.

Mike’s comics and graphic novels have earned numerous awards and are published in a great many countries.

He lives in Southern California with his wife and a very demanding cat.